I found this interesting

I know I'm sending you away from my blog but I promise it's worth it. Take a gander at Pattern Play: Indian Silver in Virginia  over at Style Court.


Posted by Chudney Thomas at 8:18 AM No comments:

So I'm putting on an Independence Day Celebration for our International Students today and it's raining! Originally it was supposed to be a pool party, yeah that didn't pan out with Debby downer sitting in the gulf. Now we have flooding in Florida, tragically people have lost their lives and there have been tornadoes. So I'm thankful that we only have rain.

We've moved the party indoors and the show will go on. Perspective it comes to us all!

On the writing front I'm most definetely finishing this story this week if it kills me. It's time to start submitting again.

"I must not fear.

Fear is the mind-killer.

Fear is the little-death that brings total obliteration.

I will face my fear.

I will permit it to pass over me and through me.

And when it has gone past I will turn the inner eye to see its path.

Where the fear has gone there will be nothing.

Only I will remain."

Posted by Chudney Thomas at 8:50 AM No comments:

Sorry for the Hiatus!

Last week I got knocked on my behind straight into bed by a virus/sinusitis! (imagine not being able to breathe, move or talk, sometimes without crying) And this week is catch up at work and the short story I'm working on. Last night was the first time I've written in two weeks. So I'm in the cave sorry I know I made promises. I'll be back next week.
Posted by Chudney Thomas at 9:33 AM 1 comment:

Photo Friday! A place to sit and rest. 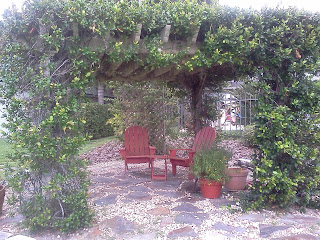 This delightful spot was a pleasant surprise at a very expensive estate sale. It over looked a lake and a wide expanse of lawn. While I couldn't afford much there I did pick up a nice Reed and Barton bowl. I promise you I'll post a photo next Friday. I did covet this spot just for a little while though.
Posted by Chudney Thomas at 9:09 PM 4 comments:

Goals and how I hope to achieve them.

So I wrote out my five year plan the other day. I borrowed my goal setting method from my husband. When we met he was a average sized guy with the very beginnings of a beer belly. The pursuit of an MBA, finishing our daughters food  and a lack of sleep when the second kid rolled around helped him put on weight.

He's lost a lot of weight since then, he's practically back to his old high school weight. When my sister in law decided to ask him how he did it the other day, this was his reply: "I decided I was fat and so I made up my mind not to eat so much."

Now mind you he started exercising twice a week and watching his calorie intake. By this time we'd already decided to go veggie for most meals and eat whole grains. But that's beside the point. He made up his mind to do something and he did it.

What he also did was do something that most of us are afraid to do. Break our goals down to their simplest forms and stick to them. It was so simple once I'd heard it out loud  I realized that I had vague goals.

I want to be a writer isn't going to help you get published.

I am a writer and I want to be making a living at it in five years, gets me closer.  (This is about doing something I love and being able to do it for a living)

But do you know what my actual goal breakdown is?

I'll tell you. In order to achieve my goal I have to sell books.

How do I sell books you ask? I have to submit books to publishers/ agents and  have them offer me a contract. (There's more in there but I'm keeping it simple, think promotion after a book gets published.)

I have to get an agent or a publisher to be willing to read the book first before they offer me  contract right? So what does that mean. It means I have to have a polished novel, a polished synopsis and a great query letter ready.

Do you know what that means. It means I have to write and revise the book before I can get to that point (I've been doing this all along. Editing however is something you have to learn along the way and I recommend taking a class)

See really simple, I have to write, revise, edit,and  submit my work. Repeat as necessary for my goal to happen. My idea for goal setting be realistic and ask yourself Why/how? like an inquisitive five year old who won't leave you alone, because the reason we hate asking these questions is because we don't like digging around for the answers.

I saw this on Isis Rushadan's Blog this morning and it applies  to every goal you ever had and intend to have. I also reminds me of a couple I know (you guys know who you are) 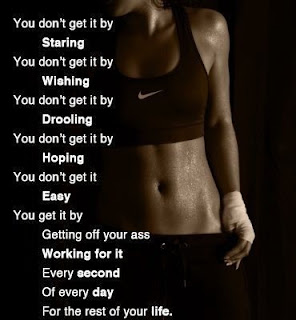