Yes Katie this one is for you.


I'm thinking Shaggy for next week. What do you think?
Posted by Chudney Thomas at 6:00 AM 2 comments: 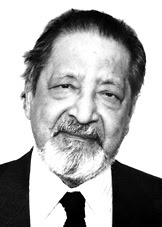 In high school I was required to read  V.S. Naipaul's "A House for Mr. Biswas".  To me back then and now, the story of Mr. Biswas was the story of a man who's goal in life was to create a place and a space for himself. This story stayed at the back of my mind, hiding there for many years. Until, one day I was walking through a bookstore and happened across a copy of "The Mystic Masseur".

Which I thoroughly enjoyed. Why am I telling you all this? I wanted you to understand why I decided to pick Sir V.S. Naipaul for this Friday's post.

First of all I had no idea that he'd one the noble prize, or that he was knighted. I had no clue that "The Mystic Masseur" was made into a movie. I only knew that he was an Trinidadian novelist, whom I was compelled to read in high school. To me he was simply V.S. Naipaul, a West Indian Writer I've read and enjoyed.
Posted by Chudney Thomas at 6:00 AM 2 comments:

I've been told by my five year old not to post any pictures of her on the internet. But one from the back couldn't hurt could it? 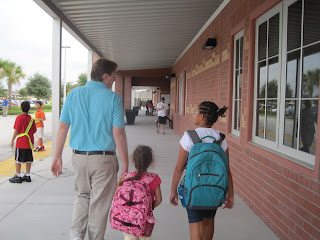 This is the Hubby walking in the girls for their first day of school. One of the many reasons I love him.
It's almost fall I'm back at work and the kids are back in school. For me it's a time to refocus and knuckle down. What does it mean to you?
Posted by Chudney Thomas at 7:30 AM 6 comments:

I decided to put two of my favorite Bond theme songs today.

To start us off Tina Tuner's "Golden eye"

Jack White and Alicia Key's "Another Way to Die."

Posted by Chudney Thomas at 6:00 AM 3 comments: 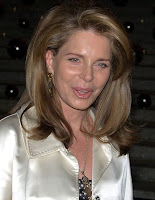 A few years ago I purchased Queen Noor's memoirs which has graced my TBR pile for well a few years now. Just recently I finally felt in the mood to read non-fiction so I picked it up. Though I'm not far into it I'm already intrigued by this woman. Honestly I have been for a long time.

American born, Princeton educated Queen Noor gave up her citizenship to be married to a man years her senior. She lived in a country different for her own. Converted to the Muslim fate and now finds herself the Dowager Queen of Jordan.

Don't you find that interesting? I do.
Posted by Chudney Thomas at 8:00 AM 3 comments:

Why I love Bond. 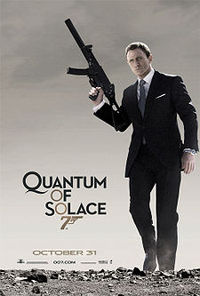 I was hankering for a good action movie the other day and realized I had Quantum Of Solace in my collection.
It got me to thinking: What is it that I like about Bond as a character.
He's ruthless yet suave.
Adaptable.
Sexy.
Wounded yet strong.
What I love about Bond is, he's complex not a a cardboard cutout. A man with a license to kill who does so, but still has heart enough to fall in love with a woman who betrays him.
By the way don't you love Daniel Craig as the new Bond?
Do you have anything to add? Please do.


So in other news: My babies are heading back to school. My youngest daughter just turned five. I would post pictures of her birthday at Animal Kingdom but I've been told in no uncertain terms that I'm not allowed to post any pictures of her. apparently she wasn't too happy about me posting a picture of her when she was having her chin stitched.

My eldest is going to be a fifth grader. Soon she'll be in middle school. It's hard to believe she'll be eleven in September.
Posted by Chudney Thomas at 6:00 AM 3 comments:

As promised. Heavy D!
If you can I suggest you get up and dance. Get that body moving. I'm back at work so you'll have to do it for me.

Posted by Chudney Thomas at 8:00 AM 2 comments:

So who would have thought that I would have followed up Christiane Amanpour with Heavy D. Well no one. I was watching reruns of Bones and low and behold there was Heavy D as Sid the manager and owner  and Bartender of the restaurant Brennan and Booth frequent.

Then I began to question where he was now. And I learned a few things.
Heavy D is: Jamaican ( Had no clue he was)
He has a reggae album out.
He was in "Cider House Rules"

I have fond memories of Heavy D. Especially of Heavy D and the Boyz, it takes me back to high school. I wonder if you can figure out who'll be featured on Music Mondays?
PS I'll be sticking to this schedule as much as possible. Music Mondays. Wednesday, will be my free for all post and Friday's will be my People of interest. Occasionally I'll link to a blog I follow so you can see what interests me and I'll take suggestions on any of these.
Posted by Chudney Thomas at 8:00 AM 1 comment:

So I attended RWA Nationals this year, for those of you who don't know it's the Romance Writers of America convention. Here's what I took away from it.

Always have a plan B. The conference was originally scheduled for the Gaylord Palms Opryland in Tennesse, due to a devastating flood  RWA was forced to move the conference in a short amount of time. The fact that they pulled it off was incredible. Though there was a complaint about the chicken for every meal. It could have been worse, we could have had no conference.

You have something worth contributing. This was discussed over breakfast one morning. As writers we tend to think we have nothing to contribute if we're not published, or let people treat us this way. The truth is we come from different backgrounds. We have degrees in different fields and have worked in those fields. The wealth of knowledge that we have, shouldn't be ignored just because someone isn't published.

Just because you're not published now it doesn't mean you won't ever be published. Writing is a process. That includes learning how to finish the book. How to revise the book. How to revise the book again. How to pitch. How to submit.  How to choose an agent, and if you can't find an agent, how to read a contract. It's about perseverance and the willingness to learn and to keep learning.

It's about having a base. Nora Roberts spoke of having friends. Friends who are willing to be there for you. I'll add to that family. they may not understand what you're doing but they support you.

Research. Whether it's an agent or an editor, a publishing house, or something for your story. Do the research.

Jayne Ann Krentz spoke of killing her career three times over. what she meant was think your decisions through. Don't be afraid to try something new. However you may want to do it under a new name if you've already got an established presence.
Posted by Chudney Thomas at 9:47 AM 3 comments:

I have to warn you my taste is pretty eclectic so brace yourself. You may find yourself listening to something you've never listened to before. Today we start of with Melissa Etheridge.

There are people in this world who are truly interesting. Those that have impacted my life, without knowing about. As a child I remember watching Christiane Amanpour reporting from far off places, war torn countries. Because of her, and the images I had of her I formed the opinion that women can do anything.


She has been the epitome of professionalism. A woman of grace and courage and while I do not know her personally she has inspired me. When her family couldn't return to Iran they made a new life. When her sister decided journalism wasn't for her Christiane stepped and took her classes and became an accidental journalist.

She has left CNN to host This Week for ABC News and I wish her the best of luck.
Posted by Chudney Thomas at 9:44 AM 3 comments:

So. I'll never tell you guys when I'm going on vacation. Why? Because even though I know you're all  wonderful, there are those who monitor blogs, facebook and the like, for just that information. What that means is I was on vacation in the wilds of West Virginia.

My family made the twelve and a half hour drive to Charleston, WV in one piece and spent time with those near and dear to us. My godson was one of the bunch. So we headed to the Greenbrier where we had a relaxing few days at a really awesome house. I'm sad to say I can't find the cable to my camera but I will post pictures soon. I saw Bears and deer and trees galore. It was a peaceful vacation.

Some interesting things came out of that vacation. My godson loves nature shows so we watched a video on Stoats.

Ok so the other place I went to was RWA Nationals. Which I will post pics from though not many. It was a little overwhelming with two thousand people, but it was fun and informative. I'm so glad that I decided to attend in Orlando this year versus New york as my first conference.

And in keeping with my vow to let you guys see what interests me, Have a look at one of the blogs I follow. Punctuation Mark
Posted by Chudney Thomas at 9:43 AM 1 comment: