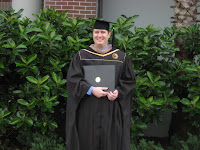 This weekend, went by in a blur.First was my hubby's commencement ceremony for his Masters, which at one point early this year I thought I was going to have to force him to attend. Wooo hooo, I forget just how many years, but he did it! After which we all needed sustenance and a nap, and Trust me after 2 1/2 hours and Sonny's barbeque, we really needed the nap. Then came Sunday and along with it the Christmas card photos. We couldn't figure out the flash on my camera. Then we couldn't get our act together to pose for the actual pictures. There are a lot of photos of one of us running into the frame.But I'm seriously considering sending out the outtakes as the Christmas cards though my mother in law isn't in favor of it. Just in case your wondering we usually send out around 200 cards so she hits her family and I do mine that way every one gets one and no-one is missed. 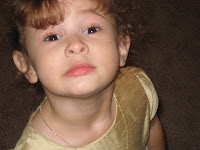 So I leave you with Alexandra doing her imperial best , to get me to stop taking pictures of her. So here's my question for you just how many pictures did you have to take to get the right one? We're at 20 plus and counting.
Posted by Chudney Thomas at 10:12 AM

Ooh, belated congrats to your hubby!