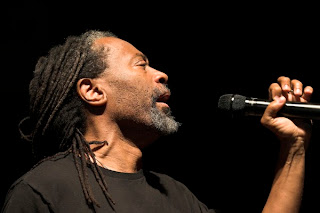 Do you guys remember Bobby McFerrin? Does "Don't worry. Be happy." ring a bell? Yep that's right, that's him. But I bet you didn't know He was a vocalist and a conductor. Born to musically gifted parents he's gone on to win ten Grammy awards and given us this feel good anthem.

Truth be told I had no idea who I was going to talk about today but then I heard that song rolling through my head. Then I remembered that there was more to this man than a Robin Williams filled video and a feel good song. I remembered  Sixty Minutes (at least I think it was Sixty Minutes) doing an interview with him and being struck by his seemingly unassuming self and his awesome talent.

Sometimes we only judge artist by what the popular majority feels is a hit and the truth is there are often untold depths that haven't been showcased. So I leave you with another side to Mr. McFerrin that you may or may not have seen.

I have a Bobby McFerrin/Yo Yo Ma cd that is one of my very faves!