The long and short of it.

This week has  been pretty interesting. On Saturday with a few friends who gave a writing workshop. It was nice to get out of the house and hang with my writing tribe for a while. We met up with a lovely group of ladies. Strangely enough I didn't breakout my camera so I have no photos.

I opted to flat iron my hair this weekend, since the whole process usually takes me about an hour, I usually keep my hair curly and in a ponytail but I was curious to see just how long my hair was. Turns out it's pretty long. 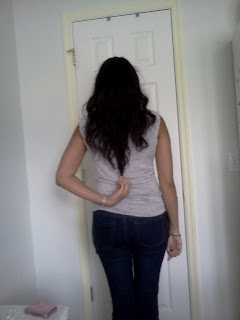 See what happens when I procrastinate? Anywho, I'd hoped to have good news for you guys  but alas I have a rejection letter instead.

Funny things rejection letters, early on they have the ability to devastate you. As you see more and more of them they become the fuel you use to get better, and do better. I'm not saying I wasn't disappointed or that I didn't take a night to sulk. I'm saying, it motivated me to do better.

So enough about my bad news how about good news for someone else maybe several someones. (Friend Pimpage)

I"m continuing to edit my Sci-Fi Romance, I'm outlining a new contemporary and working on a workshop for next year. I know I'm going to be busy right?

I'm also planning on running a couple more 5k's.
So what are you up to?
Posted by Chudney Thomas at 8:26 PM

Keep swinging, Chudney. Your number will come up. That Sci-fi romance sounds intriguing.

U Can Finish 5 miler or 2? Compelled to do one of them since UCF stood for You Can't Finish back in the day. They certainly proved the critics wrong by becoming one of the largest schools in th nation. Let your haters be your motivators!

"Let your haters be your motivators!" Love it!

5Ks... I love running them because to be honest- I don't run that far.. lol.. and completing one of those is like a huge high five! :)

Could you please take 10 seconds to VOTE for me to help me win $1K to fund a mission to RESCUE victims of HUMAN TRAFFICKING through [free-them]?

Hey Chuds
Just came across your blog. It's been awhile. Hang in there things will work out. Catch u later
Jo