Into the Wild part 2- Camping in the Rain.

Soooo we went camping again. The group of us were all equally ready for the weekend and being away from our responsibilities. So we packed up or respective cars and headed out to the campsite. Out into the wilderness where we wouldn't have access to anything other than emergency calling, a pavilion and a "chemical" toilet. Trust me when I say that there weren't enough chemicals. That, it turned out would be the least of my problems. (No this isn't a bitch about camping post)

Anywho we knew it was supposed to rain, but the day turned out to be overcast and cool (lovely for Florida). We all arrived and set up our tents, at least three of us did. 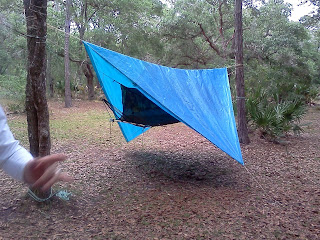 Two of the guys set up hammocks with tarps. One was complicated and took over an hour to set up, the other went up in a half an hour. Both worked equally well. Meanwhile we unpacked our respective cars and set up camp. 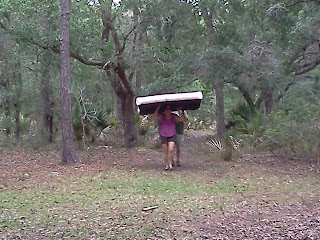 My friends brought their air mattresses, I mocked them much to my dismay later on. Much later on. After hot dogs for lunch and steak and vegetables for dinner around a roaring fire. 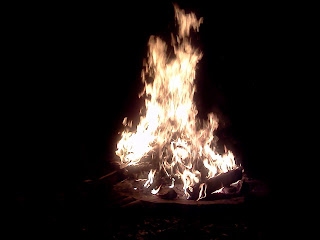 We laughed. We talked. We convinced ourselves that the people who were supposed to be in the camp site next to us had chickened out. That we were the brave ones, the ones who had triumphed over the witch called weather. So confident were we, we didn't put a tarp over the fire wood, nor the lid on the plastic container that held our card games. Though we did manage to put the garbage in the car and store the coolers under the benches of the picnic table.

All was well until three in the morning. When something woke me. It was the sound of a torrential down pour. Which was fine because we were warm and cozy in our tent. That was until, I awoke knowing something was wrong. Wrapped warm and snug in my husbands sleeping bag on our egg crate bed. I put my hand out and realized that we had water in the tent. Yep by the end of the night the hubby and I were huddled on a four foot section of egg crate, the quilt and the sleeping bag soaked by the very water that turned the bottom of our bed into a water bed. Turns out those air mattresses kept you out of the water. 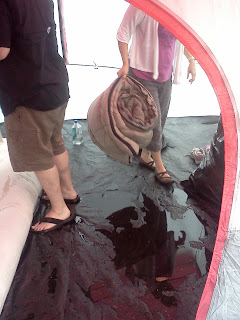 Even if you float a little.

Yeah, camping can be pretty nasty if the weather is not that "supportive." But that's the real beauty and charm of "living in the wilderness." Nevertheless, hope you have enjoyed this journey and retreat. Please share more of your camping stories in the future. Have a good one!

It is a particularly engaging offering for high rollers. Big wager limits, lucrative bonuses, and versatile transaction limits are 메리트카지노 simply variety of the} purpose why} it attracts heavy hitters. The non-crypto deposit methods are restricted to credit cards. If you’ve had some winnings and want to money out, the extra banking choices will be a participant switch and getting a examine by courier. Bets are paid even cash, however a 5% commission is charged on profitable Banker bets. The hand representing the participant is given facedown to the individual with the biggest wager on the participant.