On the third Wednesday of every month I invite someone to share a little bit about themselves.

This month, we have Azem Odu  otherwise known to me as AZ. AZ is a talented  graphic artist and from the day job. After talking to him for a while I realized that he has his own story to tell.  So without further adieu I'll let AZ tell you a portion of his journey. 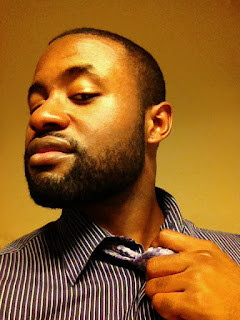 You can find AZ at:  http://www.azemodu.com/

Posted by Chudney Thomas at 6:00 AM

Adri "Big Sis" Odu
For getting me my first internship while in college at Evolution Media where I was able to give my colleague Warren an internship there too, and then hooking me up with those guys at Bluewater Media. I interned with them for 8 months. I was their longest tenured intern (chuckle). To other people you're a wife, a daughter, a sister, a producer, but to me you've been a consultant and a job recruiter.

Simisi "Big Homie" Odu
For finding me a place to stay in Santa Monica with your friend Selina when I flew there for a night to interview at Naughty Dog. And then paying her behind my back on my behalf. See, that's truly some Big Homie-type stuff. Stuff that Jay-Z would do for Memphis Bleek.

Janesa Johnson
For getting me that job as a circulation assistant at the SCAD library.

Keyso Smith
Thank you for talking to me in detail, from experience, about cancer and how to deal with my mom. I forgot to let you know this at when I spoke at your wedding.

Warren Puzo
For trying to get me in at every job you were at (chuckle). And continuing to let me know my time will come.

Anthony Frazier
For hooking me up with Akeezee Productions. I was able to bring my team on too even though it didn't work out. You gave me an opportunity and allowed me to give others an opportunity.

Vanessa Lind
For reaching out to your mom and letting me use her as a reference on that Pinellas County application.

Xavier Morrison
For getting me in at Pappadeaux Seafood Kitchen.

Tameka Hanna
For writing a bunch of recommendation letters on my behalf after only supervising me for a month of summer camp.