Today's guest blog deals with Romantic Deal Breakers. I'm pretty sure you guys have some ideas on what those might be. KC Burn my good friend and partner in crime has a few ideas on the subject:


I watched The Birds not long ago.  I’d never seen it before (I’m not much into old movies) but I thought it was maybe time I did, for my own edification.  I mean, it can’t hurt to watch what’s considered a classic, right?

Well, one part in particular caught my attention.  The heroine (whose name escapes me… clearly I wasn’t THAT into it) follows the hero home (a man with whom she had a brief conversation with in a shop… where she LIED about who she was), sneaks into the hero’s house and leaves a bird as a gift for his sister (who she knows even less than the hero).  The heroine also pumps local inhabitants for information about the hero and his family.

My first thought?  Ew.  Creepy stalker.  Forget the damned birds, Hitchcock had the makings of a scary movie right there.   No doubt that part of the story was meant as some nod to feminism or something.  On further consideration, though, I know I’ve read scenes like this in romance novels and was perfectly willing to suspend disbelief that the recipient of such actions would be romantically inclined towards the ‘stalker’.
In real life, though?  This would be, hands down, a romantic deal breaker.  But I am a lot more forgiving in my fiction, and I’m not even sure it’s necessarily because of the ‘fantasy’ element.  I’ve read more than one sexy hero who smoked, and the smoking itself was sexy in the story.  Real life, though?  Another deal breaker.  Several years ago, my husband wanted to take up cigar smoking.  I told him I refused to have kids with someone who smoked.  So he didn’t.  The irony of us later deciding not to have children is not lost on me.  Nevertheless, I think I surprised him by taking such a hard stance, because I’m a fairly laid back sort of person.

What about cheating?  Now, I see more of this in gay romance than I have in straight… at least, where the cheater is forgiven and taken back.  Personally, I think that it has more to do with long-established reader expectations in straight romance than anything else.  Regardless, cheaters can be forgiven and the relationship can go on.  I don’t know if I would consider this a deal breaker, because I’ve never truly faced the situation.  I like to think I could be reasonable if I was in love with the person and it was a one-time physical thing, but I can’t be sure.  Can a relationship truly survive that fractured trust?  I’ve seen it strongly affect friends’ subsequent relationships, long after breaking up with a cheater.

So, I’ve covered smoking, stalking and cheating.  What about other plots like voyeurism, gambling, drug addiction, abuse, alcoholism?  I’ve seen them all in fiction, but I’m pretty sure I wouldn’t have the patience in real life to accept these in my relationship.  And I’m reasonably sure no one actually fantasizes about having a partner with these issues, so what is it that makes these plots compelling?  Why are these not reading deal breakers?
Tortured heroes?  Super sexy in books.  In real life?  No way.  I like my men with minimum baggage, fully sane and responsible members of society.  Of course, that may be because I’m loaded with baggage and not entirely sane.  Thankfully I’m still a responsible member of society.

I believe the reason we read about tortured characters and seemingly impossible relationships is hope.  Hope that if these people with all these problems can find love and happiness, well, we’ve all got a chance, too.   But I’m willing to entertain other explanations! 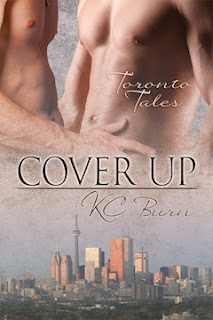 Cover Up Blurb:
Detective Ivan Bekker has hit rock bottom. Not only is he recovering from a bad breakup with a cheating boyfriend, he’s also involved in a drug bust gone bad. Ivan had to kill a man, and his friend was shot and is now fighting for his life. Though Ivan is under investigation for his part in the shooting, his boss sends him on an off-the-books undercover operation to close the case. The timing is critical—this could be their chance to plug a leak in the department.

Off-balance and without backup, Ivan finds himself playing a recent divorcé and becoming Parker Wakefield’s roommate. He finds it hard to believe that sweet Parker could possibly be a criminal, much less have ties to a Russian mafia drug-trafficking operation, and Ivan lets down his guard. His affection is unprofessional, but Parker is irresistible.

When Ivan comes across clear evidence of Parker’s criminal involvement, he has to choose: protect their relationship, regardless of the consequences, or save his career and arrest the man he loves.

Bio KC Burn has been writing for as long as she can remember and is a sucker for happy endings (of all kinds).  After moving from Toronto to Florida for her husband to take a dream job, she discovered a love of gay romance and fulfilled a dream of her own -- getting published.  By day, she edits web content and at night she neglects her supportive, understanding hubby and needy cat to write stories about men loving men in the past, present and future.  Writing is always fun and rewarding, but writing about her guys is the most fun she’s had in a long time, and she hopes you’ll enjoy them as much as she does.

Visit KC at her web site: http://www.kcburn.com or on Twitter: http://twitter.com/authorkcburn

Posted by Chudney Thomas at 6:00 AM

Hello There,
I just wanted to see if you were currently interested in additional guest bloggers for your blog site.
I see that you've accepted some guest posters in the past - are there any specific guidelines you need me to follow while making submissions?
If you're open to submissions, whom would I need to send them to?
I'm eager to send some contributions to your blog and think that I can cover some interesting topics.
Thanks for your time,
Tess