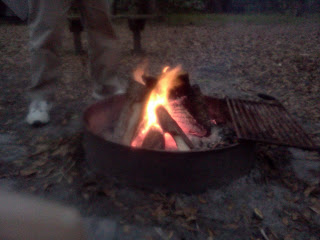 We went camping last weekend and as I mentioned in my sunday post﻿ , I was expecting my over active imagination to get the better of me. It did, but not in the I'm to scared to walk to the Port o potty at night thing. Before you girls or guys start making choking sounds this one is clean. (Otherwise I'd be digging my own hole) Yeah. Yeah. I know gross.

The weekend started off on Friday, I dropped the man off at work for a half day and headed home only to realize that I couldn't bask in having the day off just yet. I had to shower and head back out to the DMV to renew my drivers License. I hear the groans already.

The Tag office I went to used to be this quiet sleepy little thing with not to many people in it. Obviously I hadn't been there in a while because when I stepped in the doors, low and behold, there was better lighting, more counter space and yep people. Wall to wall people.

So I did what eveyone else did I took a number. Cringed when I saw I was number 316 and found a seat. My father used to say that I was like a vagrant in the town named Pipiry ( no idea how to actually spell it) Because  Pipiry always had a multitude of bags. I only had one.

My bag was filled with my electronics; ie laptop, nook, cell phone. My favorite blue suede notebook, sharpies and pens and of course snacks. Plus things like my mini umbrella. As you can see I was set, waiting wasn't a problem for me. Untill, they finally called my number and told me it would only be a 15 minute wait. It turned into an hour, at which point they told me that they were having trouble printing my license ( I started imagining what I coud do with super powers at that point) I did get my license not to long after that.

Which meant I left, picked up the hubby and kids with all of our acamping gear. Drop the kids and the dog off and headed out to the park. (Did I mention this was an adults weekend. Ps I love the grandparents and aunt for baby sitting) Things were fine. The camp site was beautiful. Until:

We forgot the rain slick. It wasn't in the bag with the rest of the tent. It was.... at home on the pool table, in the garage covered by the clothes I'm donating to charity. (yes vietnam vets are going to pick them up soon) So off the hubby went leaving me with his half drunk Guiness and all of our stuff to go get our rain slick. Before you ask. It was neccessary. Our tent is mainly mesh without it.

So I figured I'd set the tent up myself. Afterall I'd done it before (forgot that I'd had a second person). After much conversation with the tent, some sore fingers, and the duct tape being used because one of the poles decided that it might be a good idea to split. I got it up and realized that I had nothing else to do.

I ended up laying on top of the pinic table. Through the canopy of the trees I watched the clouds go by. Bit by bit my body relaxed into a half doze and my mind began to wander. I had the fleeting thought that perhaps most women would be afraid being out in the woods alone by themselves. Honestly for the first time in months, laying on the wooden table, alongside a lizard who decided to sun himself as well, I couldn't find it in me to be afraid. I felt like myself.

Posted by Chudney Thomas at 1:21 PM

"... laying on the wooden table, alongside a lizard who decided to sun himself." Now that's camping! And I think there is a story waiting to be told about "a vagrant in the town named Pipiry."

Super post, Chudney. Thank you for taking us along.

No problem David. I'm not even finished. I figured I wouldn't bore you guys with a long post. :)

Your experience depicts a memorable camping experience. The part where you watched the clouds through the canopy of the trees is breathtaking.